My Random Journey Through Trek #42

Seven of Nine is cooking up a storm in the mess hall and preparing dinner for Janeway, Chakotay, Paris and B'elanna when the ship is roughly shaken after encountering a localised gravity anomaly which turns into some sort of funnel which pulls the ship into a huge void. Voyager is attacked by a ship which is then driven off by another which in turn attacks Voyager and beams cargo and equipment off of her. A third ship approaches and hails Voyager, a General Valen offers information to Janeway about the reality of the void and offers some help but the captain is unwilling to turn pirate and attack other ships for resources. Voyager is able to determine when the next "funnel" will be created and she tries to escape but lacks the power and she is thrown back into the Void now with even less energy. 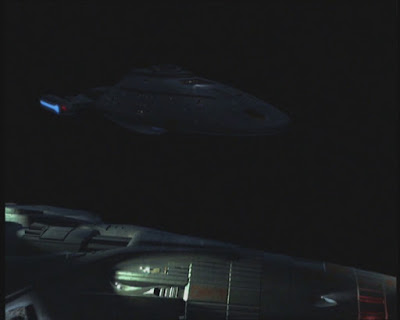 Janeway decides to track down her stolen supplies and finds the vessel responsible, it is dead in space but the warp core casing can be processed as an energy source so the beam it onboard and find a being hiding inside, he is very hungry and seems to have no verbal language. They track down the ship responsible for the destruction of the pirate ship and find that it's General Valen and when talking proves pointless they attack and retrieve some of their food and tech but leave behind the goods that were not theirs. At this point both Tuvok and Chakotay question the sense of not taking what they need given that they could be dead in space in a week or so but Janeway will not let her ship kill and pirate for resources. However she proposes the idea of a mutual alliance based on sharing resources and protecting ships the enter the void with the goal of solving the problems in escape the void. Overtime she recruits ships but eventually the commitment of not killing to solve problems leads to a confrontation which comes to a head with Voyager along with her allies attempt to escape. Thanks to the positive approach of the Doctor, Seven and Janeway the allied ships escape and are free to return to their own worlds. 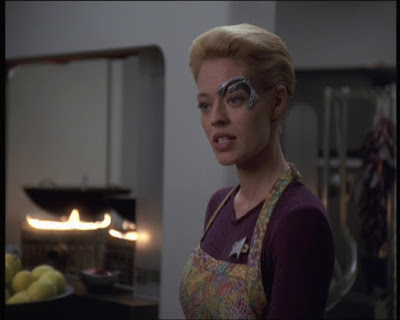 The Void certainly has echoes of an animated original series adventure called The Time Trap and proposes that ships and crews working together have a greater chance of escaping their fate than if they attempt to kill each other for resources and in both episodes that proves true.
It was amusing to see Seven cooking and doing a great job, better than Neelix himself which he is quite happy to admit but again you wonder with how big space is the ship always seem to run into those unexpected anomalies and after the carnage we get the classic "reverse shield polarity" which for a seventh season episode is not on:) The Void is good idea, a bubble of space/time which draws objects in but of course we know Voyager is going to get out which takes a lot of the suspense out of the episode. I was a little disappointed that once again the sensors both ship and transporter were unable to detect the alien being but at least they did address that even if I didn't accept a word of it. I was also quite surprised both Chakotay and Tuvok were advocating piracy to allow the ship and crew to survive, I'm sorry but from those two I didn't buy the scenario at all, infact again after so many years we know none of the regular or recurring characters are murderers so there was no question Janeway and her mutual cooperation and support idea was right for them and the situation.
It was hilarious that Seven was looking for blood when her "spanner" went missing but countered by her gift of food to the alien they brought on board, not quite sure how his race evolved in the Void or that when his species were together they only talked via the beeps and boops the Doctor created, a nice scene but didn't make a lot of sense.
Oh we got a montage and Voyager got more advanced replicators, shame they are nearly home but overall not a bad episode of Star Trek and some of the cinematography was very nice indeed.
IMDB
Rating 7