My Random Journey Through Trek #41

The Survivor
The Animated Series

Long range scans find a damaged spacecraft near the Romulan Neutral Zone, the craft is brought on board and it's one occupant is identified as Carter Winston a well known shipping tycoon and philanthropist who went missing five years ago. Spock orders a full medical and security check which McCoy thinks is a little over the top but Kirk agrees since it is the regulations. McCoy finds some irregularities with the scans of Carter but clears him and he is reunited with his fiancee from five years ago one Lieutenant Anne Nored. Carter is fairly cold towards her saying his is not the same man he once was and encourages her to forget him and move on with her life, she is upset as you would expect. Carter then goes to meet the Captain and changes form into a tentacled creature which envelops Kirk and copies Kirk perfectly, while the Captain is unconcious on the floor of his cabin the copy aka Carter goes to the bridge and orders the Enterprise into the Neutral Zone towards a colony which requires aid. 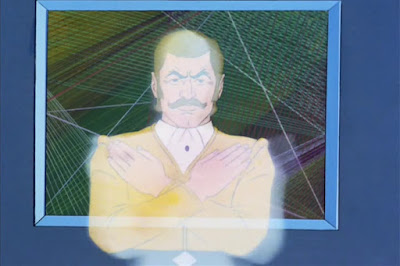 When Kirk awakes he is surprised to find the ship in the Neutral Zone and orders it to reverse course and as the security tapes show Kirk giving the orders they go to see McCoy who at that very time has also been copied by Carter but Spock catches onto the ruse and Kirk finds Carter who is in another guise. The alien is identified as a Vendorian a species of shape changes who are known to be untrustworthy to such an extent their planet is quarantined yet here is one who confesses to having known Carter Winston, Romulans choose this time to intercept the Enterprise and demand its surrender. The Romulan commander and Kirk banter back and forth but eventually shots are fired alas Carter has sabotaged the deflector system but now knowing he has put "his" fiancee in danger he arranges his molecular structure to create a deflector screen and the Enterprise fights off the two Romulan cruisers. 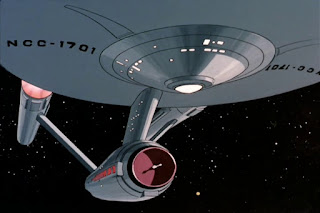 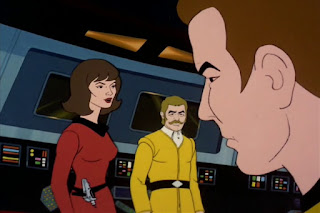 Kirk is impressed that the Vendorian chose to protect the fiancee of Carter and by extension the ship and he explains that having known Carter for so long (after he crashed on their world) he had absorbed the emotional aspect of the human and could not help but aid the them. Anne is moved by the emotion and is not adverse to address both their relationship then, now and in the future.

The Survivor was actually quite a fun episode albeit plenty of flaws in the plot but you don't watch the animated series for concise writing or animation come to think of it:)
The alarm bells should have been ringing when Carters ID showed him in the same clothes he is wearing now and after being missing for five years not sure why his licenses etc would still be current. They also went a little overboard on his philanthropy, I don't quite accept the Federation require third party private aid in rescuing or resupplying Federation worlds which are in distress but they want to make sure we all know Carter was a good guy. It was a little strange that McCoy was fan boying quite a bit upto the point of being against running standard tests and then not prioritising issues with the results but plot and all that. It was cool to see Carter turn into a tentacled type creature before taking the guise of another, nice little effect and you really don't need to know the technobable explanation of why his species is capable of this. The biggest issue was the Federation and maybe other societies had quarantined an entire world because the natives were shape shifters who couldn't be trusted, wow racist much. Mind you surprised the Klingons or Romulans didn't wipe the species out if they were that much of a threat but I suppose as a resource the Vendorians do come in handy.
I was appalled that Spock and Sulu never really baulked at Kirks order to enter the Neutral Zone but loved the security recordings of bridge activity complete with edited for effect close ups :)
Maybe the alien siding with the Enterprise thanks to the emotional component of Carter was a little trite but I think it worked quite well and I think we all love a redemption story and how IDIC that Anne is not repulsed by this version of Carter.

Overall The Survivor was fun and I did enjoy watching the episode although over a page of notes for a 24 minute episode made it look worse than it was, little plot issues and character quirks but we can ignore them, can't we?
IMDB
Rating 7