My Random Journey Through Trek #35

Deanna Troi slinks into Ten Forward in a quite suggestive manner and catches the eye of an officer (Lt. Barclay) who is leaning against the bar, Guinan tells him she doesn't want any trouble but when first Geordie then Riker berate the officer they are physically dominated and as he makes his play for Deanna the coms open up and it's revealed he is on the holodeck. Medical samples are being brought aboard the Enterprise but a fault is found in an anti-gravity sled, Lt. Barclay is called in to investigate and in reality he is certainly not the confident Barclay from the holodeck yet he claims to have fixed the sled but when tested it fails spilling more of its contents. 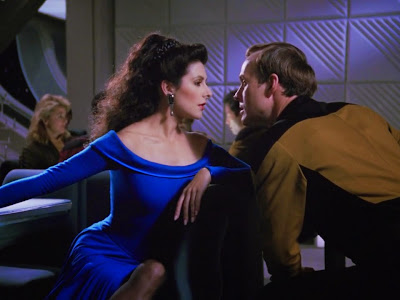 Geordie has a frank discussion with the Captain but is pretty much smacked down with orders to do a better job dealing with an officer in his department so he reaches out and unfortunately the staff meeting doesn't go smoothly but maybe not so bad as expected. The ship soon begins to show signs of further technical issues beyond the gravity sled, the molecular structure of a glass warps, the transporters fail a test sequence then the injectors on the warp core freeze. Barclay attempts to address his issues with the real councillor rather than in the fantasy world of the holodeck but when the pressure is on he returns and unfortunately it's Riker, Geordi and Troi who walk in on him and do not react well to the revelations of Barclays activities.
The Enterprise with it's faulty injectors continues to accelerate with impending structural failure and as the ship begins to shake itself apart the engineering crew with Barclay link the location of the faults to where they have been and thus perhaps they have been carrying the cause of the faults around with them yet invisible to the ships internal standard scans. After some intense library computer use they confirm the existence of the substance and provide a solution, it's implemented and the ship drops from warp, the day is saved and Barclay can take his first step away from his fantasy land and into the real world.

Lets begin with the opening teaser, pretty good and Deanna certainly was uber eye candy but as we learn more about Barclay you can understand how he got through the academy with it's psych and physical evaluations. I would say Barclay was far more suited to a position in a civilian position and consulting for Starfleet. That said at least he didn't go around picked up broken medial containers without gloves or other containment procedures. I wonder how much Starfleet spent on the anti grav sled rather than a wheeled trolley which would do the same job...
I'll admit I said out loud "Shut Up Wesley" when he stepped on Barclay during the staff meeting but at least they did address it and despite some rather petty and cruel name calling (out of place in the era of TNG you would have thought) it seemed everyone eventually got on board with trying to help Barclay. I also have issues with Holodeck use, a thousand crew and it only ever seems to be used when a main episode character requires it after all Barclay was on duty a lot of time he was using it so what were the other two shifts doing during their downtime. As for hijacking the physical and psych profiles to use in an entertainment programme surely would be against regs regardless of what Geordie said. After all that though the episode was just about saved by Picard when he he said "What the hell happened" seemed out of place but loved the slight exasperation from the Captain:)
Note to the designers of the Enterprise, a physical override if you please and since when did the Enterprise in it's early TNG voyagers have issues with speeds up to 9.9 at the very least?

Hollow Pursuits has it's plus points, there is some humour but a lot of it is forced and wanders to much into farce although it was good to see both Picard and Guinan being the enlightened elders of the ship although the points they made are just as relevant today. I like Dwight Schultz and thankfully his performance of Barclay grows significantly, credit to him and the writers but overall this is an average episode of TNG.