My Random Journey Through Trek #34

On their way to Risa for a little shore leave the Enterprise picks up a distress call and they rendezvous with a small one man ship, they retrieve the ship and make repairs and the pilot Zobral offers the Captain and Trip the hospitality of his home in thanks. They are reluctant but agree and take a shuttle to his desert world and they share a meal and take part in a sporting event before getting a call from T'Pol who has been in contact with the Chancellor of a nearby city. It seems these desert dwellers are considered to be terrorists and when confronted Zobral admits they brought Archer and the Enterprise to the planet under false pretenses. He reveals that his people were being repressed and despite political changes the majority are still denying the same rights to his people and thus a strategy of attacks and bombings are under way with the desert providing safety and cover for their groups. Soon after the camp comes under attack from security forces and in the chaos Archer and Trip escape into the desert but with little water and far to travel things do not look good.
So even in 2152 Risa had a well oiled marketing machine for being the resort spot for space faring species, good to know but it seems Porthos and the crew will have to wait since Archer has put being polite to Zobral (yes Clancy Brown rocks) ahead of the well being of the rest of the his people. It's also reassuring to see a simple welding job I assume fixing the micro fractures in the ship, not exactly 22nd century though and boy was it a tight fit getting through the landing bay doors!

I'm not quite sure I could reconcile the simple desert lifestyle with the ftl capable ships his people used but given Zobral was being a little underhand maybe this camp was more for show although the security forces are pretty ineffective given their access to satellites and associated technologies. A raised eyebrow that the cat fish loving trip had issues with snake or "essence of the male" but I guess that was a little humour injected into the story but surely the lacrosse "playing with the boys" scene provided all the laughs required:) 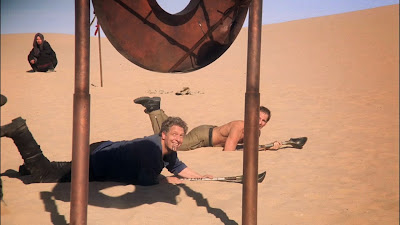 I liked the discussion between T'Pol and Hoshi which was exploring the idea of a prime directive, it felt forced but certainly the series should be exploring the issues involved with some casual decisions dealing with ongoing relationships and first contact. Desert Crossing did look great so as always credit to the cinematographer and the episode's director, the location shooting looked very good and even the intercut studio scenes worked pretty well with the only negative being the CGI which at times looked a little cartoony.

I'd have to say Desert Crossing was a solid Archer episode but not the most exciting although Clancy Brown never disappoints and as such it was one I wasn't really excited to see come up via the random number generator but hey there are worse:)
IMDB
Rating 5