My Random Journey Through Trek #31

Commander Riker visits DS9 and makes a play for Kira, as the flirting continues she takes him on a tour of the Defiant and even unlocks the bridge with her own command codes, he then shoots her.
Surprise, it's not Will but his own self Tom who is now part of the Marquis and with a little help he steals the Defiant and takes it into the badlands and onward to the DMZ to raid Cardassian space with one particular objective in mind.

So DS9 are making use of Thomas Riker who we first met in the TNG episode Second Chances and back then he had a chip on his shoulder and it seems the last few years have made him more intent to make his own mark on the Federation. I guess following a successful older brother into the same profession is tricky so when you are pretty much competing with yourself you would have to go to extremes. Of course this Riker lacks the hands on experience both in command and it seems the political big picture yet it's amusing when Kira points out he ain't no terrorist either, Starfleet and the civilisation imprinted on him by his family and culture remain.
I wasn't overly happy to see how poorly Kira was handling the pressure of running DS9 but not a bad idea to piss off the Doctor if it's gets you a couple of days off work, result. Thomas was clever to be very aggressive with Miles, put all the pressure on the guy you want to avoid, less likely to approach you knowing you were only going to be around for a while. It was a little too easy to get access and control of the Defiant, you would have thought Starfleet would have done something to differentiate the two Rikers given their relative security clearances and yes the Defiant is a "little ship" but even automated it seemed a stretch how few untrained Marquis it took to fly her. Of course when in combat the ship was at a disadvantage, immediate repairs and compensation normally provided by a full crew would have made the mission far easier. I did laugh myself silly how easy Riker seemed to defeat the anti-proton scanning but maybe in reality his countermeasures didn't work which is more reasonable to me anyway. 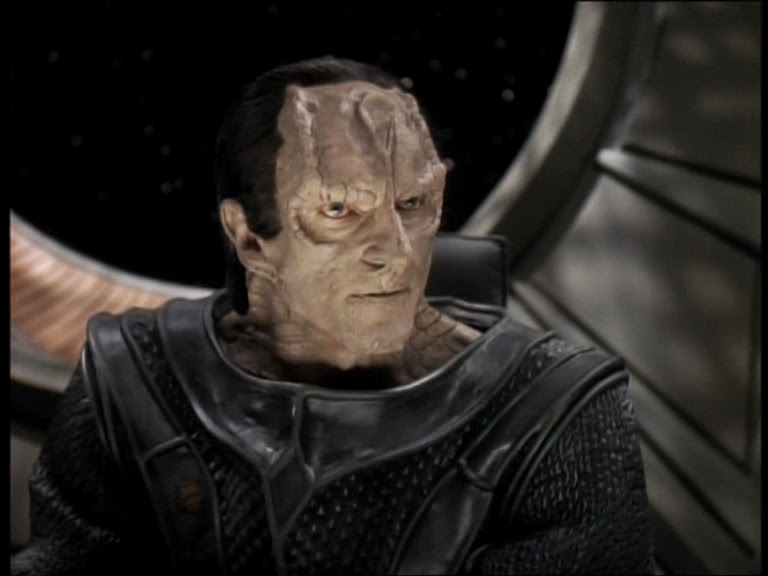 Dukat played by Marc Alaimo was excellent as usual, his story of his son may have been pure manipulation or a very simple lesson in how a Cardassian would view things, either way we again see Cardassia as being far more complex than you would think as the Obsidian Order are operating far outside their mandate.

Overall Defiant wasn't a bad episode and it was a good use of Thomas Riker but I wasn't totally sold on how they wrote Kira for this episode from her initial attitude with her work and Riker and then her speech about terrorism and the state. When she stated "I was a terrorist" it was accurate from the perspective of the Cardassians but not of her own people and certainly not in her own mind, maybe it was to offer a simply black and white argument to Thomas but it still felt out of place.