Times are tough on the mining colony controlled by Kerk Belzak having to deal with a workers collective demanding better safety and pay so despite killing his workers spokesmen he decides to buy and then steal Twiki and use his enhanced AI to create a bunch of robots to mine the mineral Blazium. He sends his enforcement unit a trio of telekinetic women to do the deed but of course Buck won't sell so they steal Twiki and Buck gives chase. Meanwhile Wilma is in charge of a moving a huge space berg through the solar system into Earth orbit and then crash it into the north pole where huge amounts of oxygen will be released to help heal the Earth after the atomic war. An ion storm diverts the space berg and it looks like it could cause devastation on Earth and in the turmoil Buck is kidnapped and Twiki goes to the rescue but Buck takes on Kerk and his goons, escapes the colony and saves the day.
What is a dishonest business man supposed to do with uppity workers? Well you would think that with so much advanced technology in the galaxy relying on thousands of manual workers for mining would be a thing of the past. Of course Kerk's action make him the bad guy straight away so we're good to go which leads us to the space berg, ok bringing water to the Earth from the asteroid belt makes sense, not quite sure dropping it on the north pole is going to release oxygen, even melt water would benefit a poisoned world but the explanation is a little light. Loved seeing Twiki going for a space walk and even more bizarre when he somehow got into a starfighter, took off and was wearing a helmet, not sure how but go Twiki!

Anne-Marie Martin ) turns out to have a son and is being pressured to do the naughty things which gives the story a sort of happy ending when she finally helps Buck to escape the mining colony and nick some Blazium to use to divert the space berg, somehow:)
Twiki Is Missing isn't a bad episode at all but were getting late into the season and money and ideas may just be getting a little short.
IMDB

Well the Olympics have moved beyond Earth and have been embraced by the galaxy and Buck with his traditional five ringed flag is invited as a guest to the latest games, as a sports fan he is up for this and is looking forward to the competition. Alas political and ideology influence has infected the spirit of the competition and two competitors who have feelings for each other are being kept apart by one of the governments who keep their "stars" under tight control with threats and intimidation. Buck is approached by Lara Teasian ( Judith Chapman ) and is asked for political asylum and after consulting the Earth directorate is is agreed and then a behind the scenes "war" goes on to keep Jorex Leet ( Barney McFadden ) competing and when the gold is won to punish him by using the brain implant he has in his skull which has been turned into a bomb.

Olympiad isn't a good episode, it pulls on the political and sporting reality of the time with athletes being symbols of a nations power and legitimacy, this hasn't gone away but thankfully many of the nations that practiced this sort of control over their people have changed. So the episode is very dated and what's worse is that they try to make the sports modern with sonic boxing and martial arts, super high jumping and astro sledding which plays a pivotal role in the story. Budget restrictions meant most of this had to take place in a single enclosed arena with ported in audience noise and it simply doesn't work, it's rather pathetic to be honest, it would have more sense to imply a huge complex and have just one or two sports in the visible arena. Of course Wilma has to save the day by stealing the explosive trigger and wears some tight tight shorts but with skin tone tights etc which kinda negates the impact but how interesting that the even has women hired to "entertain". I'm not going into how a sporting event exists with so many worlds with varying gravity and an open admission that generations of some people have taken steroids etc. It's almost as bad as the Miss Cosmos which at least had the integrity to include genetics as the main point not just looks. 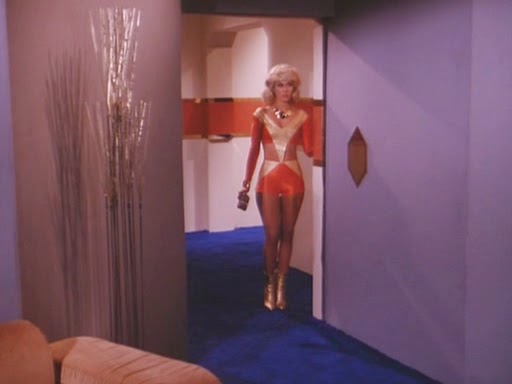 I can't really recommend this episode at all:)
IMDB