In the penultimate episode of the series the commander of the industrial ship the Celestra is honoured
for it's performance during the flight from the colonies and during the ceremony Starbuck recognises
the pilot of the commanders shuttle. When the commander is returned to his ship a fault develops
in drive system and then some of the workers attempt to steal a ship but are caught between the
guards and Starbuck and Apollo who have taken their Vipers for some "maintenance".
The Commander along with the warriors take the "mutineers" back to the Galactica but are given
faulty navigational data which sends them into deep space and then the Celestra now under the
command of the first officer heads towards the fleet. When the workers explain they were being
treated as slave labour by the first officer the situation becomes clearer and together they manage
to return to the Celestra and a battle for the ship commences.
This wasn't a bad episode at all and while it doesn't delve into the social and economic elements
of a workforce totally dependent upon who controls the ship and how easy it is to only see the
surface of a situation it did have the seeds which were later cultivated by Ronald D Moore.
I guess for morale purposes honouring a veteran of the fleet makes some sense but it did seem a
little out of place but it did bring in the new character and partially explained how Starback and
Aurora (Ana Alicia) lost contact. It was ridiculous however why any ship would require navigation
data considering everyone is going in the same direction but hey it's human nature to be a jobs
worth and well she's pretty and he was a guy.
I really liked the small touch of having the Viper scanner actually show zero as targets velocity,
didn't need that level of detail but it added so much when the show is based on using a lot of
stock footage. Now the first big battle scene made no sense, we've seen the blasters have a stun
setting yet it was never used and it was a little silly seeing the commander running around the landing
bay when we've seen he's an old guy and isn't as spry as he once was.
The twist as the first officer leads the mutiny once the initial uprising is squashed was nicely
written, we got some some foreboding but it was done well and the story as written made sense.
As for the workers, they claim they were treated as slave labour, limited rations etc etc but hey they
all looked pretty healthy and if nothing else it seems the ships stylist was kept busy working on the
hair off the crew.
It was also pretty amazing how fast the shuttle was, they managed to catch up with the Celestra
and actually vector in ahead of it and remember the Celestra was reputed to being moving pretty
fast in an effort to catch up with the fleet. I suppose we have to ignore that but the drama with the
landing fell a little flat, it's not as if the shuttle would not have lights so a dark landing bay would not
be that big of a problem after all the technology of Battlestar doesn't seem to favour the level
of automation we have today. In that respect it was a little laughable that this huge ship had a
simple joystick for maneuvering but again it aided in the plot as Commander Kronus (Paul Fix)
as he was dying controlled the ship and allowed for the battle to swing in the good guys favour.
I don't think we needed or the Space Soap elements and angst but taken as a whole the
episode worked and it was entertaining.

The Hand of God

The final episode of the season and the series prior to it's morphing into Galactica 80 sees
Apollo, Starbuck, Sheba and Cassiopeia in what was a navigation bubble used in Galactica's
early days as a backup system. The sensors pick up a weak signal on a band the colonies
haven't used for a long time and upon investigation they track through a nearby solar system.
Vipers find a Cylon basestar but escape unseen and Adama decides that the best course of
action is to take on the single basestar as it seems to be the only one in the vicinity. To aid
in the mission he offers Baltar his freedom if he provides tactical and schematic information
on the Cylon ship which will help Starbuck and Apollo fly the captured cylon fighter into
the basestar and then help to sabotage the sensors of the ship.
They infiltrate the basestar and when the Galactica engages she does get off the first shot
and while still badly damaged she destroys the basestar which seemingly leaves the path
clear to their final journey towards Earth.
The final scene of the episode and the show is in the navigation bubble aka Hand of God
as a few seconds of the transmission is received which is the live feed from the Eagle lander
as it descends towards the moon.

The Hand of God is a very fitting final episode for the season and actually doesn't smack
you in the face so not too bad for the last of the series either.
I had to laugh that the Galactica didn't seem that advanced in terms of noise cancelling
technology and it seemed strange then when the Colonials built the Battlestars they still
considered the need for some sort of dedicated facility for manual star charting.
I laughed even more when the Basestar turned up, they've made it clear the Cylons were
left well behind and here is another bunch of them and they even strain credibility by
saying it may be the only one in this galaxy.
I liked the idea of using the captured cylon fighter and certainly making use of Baltar when
properly motivated of course but the overall plan was very very risky if indeed a Basestar
was more than a match for a Battlestar. I guess the Galactica as it is now being so weakened
and with a reduced Viper compliment the odds are in the Cylons favour so even one volley
could make all the difference. I also think who ever designed the Basestar needs a smack,
the Cylons are not the most athletic to begin with so the narrow corridors and ladders
seemed a little out of place. It did add to the drama as the boys tried to climb down one of
the said ladders while not being noticed by the Cylon who you would assume would have
pretty good hearing but it all worked out including the wagging of the wings to replace
the friend or foe transmitter they lost.
I was pretty close to cheering when the command "fire as she comes to bear" was issued
and large ship combat in space has always reflected the grand tradition of wet navy cannon
combat and the broadside gunning. 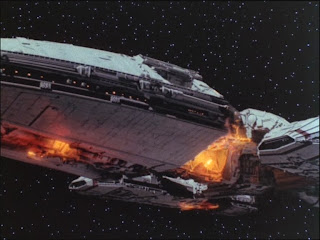 The episode closes with a scene of the navigation bubble or Hand of God as Apollo
referred to it and when it received the transmission from the Earth of the moon landing it
kinda summed up the whole series. It still left a little mystery, as explained in the episode
the signal could be relatively close or still thousands of light years away but it laid down
a marker in terms of how the Colonials related to the Earth based human race.

The classic Battlestar Galactica and it is a classic of the genre has dated, pretty much everything from that era of television has not aged well thanks to the culture of the time which really was a law unto itself. That said a lot of the ideas and concepts are well grounded in scifi throughout the ages and certainly helped to shape the re-imagining of the series by Ronald D Moore so many years later. The DVD boxset is excellent value at the moment and while the picture quality could be better we're really not going to see money being spent to restore it so it may never look better. That said the theatrical feature of the three part pilot has recently been released under a 35th anniversary Blu-ray which does look better but still not outstanding but allowances do have to be made, the show may have been very expensive at the time but it's still 70's television.

That's my rewatch of Battlestar Galactica done and dusted until next time of course, if you can put aside the dated costuming and production style of the era the story overall is well worth taking the time to delve into. It has it's fair share of lemons but what series hasn't but there are also some gems and for that you should give the show a chance:)