Once again Starbuck and Apollo are on a long range patrol but this time they get ambushed
by two other Vipers, the shooting starts in earnest and unable to disengage they discover
the two attacking ships are from the Battlestar Pegasus believed to have been lost two
years previously. It turns out that the Pegasus evaded the destruction of the fifth fleet and
went deep into uncharted space and has been harassing the local Cylon planets for resources.
Commander "There's Nothing Holy About Me!" Kane ( Lloyd Bridges ) sees this chance
meeting as a sign that once and for all he can capture Gomorray the local Cylon capital and use
it as a base to strike back but Adama with the fleet in mind is far more cautious.
Circumstances conspire against Adama with a little nudge from Kane and a strike against the
planet is undertaken while the carefully balance the threat between the garrison and Baltar's
basestars which are closing fast. Eventually Kane leads the Pegasus into the fire to give the
fleet the time needed to effect repairs and with the stolen fuel flee this region of space.

You know that very brief synopsis totally fails to this double episode credit, it's an epic
story within the series with Lloyd Bridges complete with gold braid and swagger stick hamming
it up bigtime but in fantastic style, you can not help but like the character. The addition of the
daughter Sheba will shake things up and eventually give Apollo a little more depth and the
ongoing Starbuck and Cassiopea romance is rocked with her previous relationship with Kane.
Baltar complete with dramatic mood lightning gets close to realising his goals so much so he dons
a Cylon helmet and takes the third seat in a fighter but gets the shock of his life when he discovers
two Battlestars.
Baltar "It's Impossible"
Cylon Pilot "No, it's a Battlestar"
It's still a little annoying how selectively poor the Viper scanners can be but you would still
wonder why the two Silver Spur pilots were actively trying to kill two other Vipers, the
mention later of their flight path taking them towards Gomorray seemed inconsistent.
We won't even get into the chain of events that led the fleet to a dead stop in the middle
of nowhere, not exactly good resource managment was it and yay for coincidences when
Kane's love interest was one of the few saved from the colonies. Of course that also
gave us some humour with Starbuck and allowed for a little growth and BSG isn't the only
show then and now to use that sort of plot device.
This story did have some very good high points more so than low it has to be said, Lloyd
was wonderful with Anne (Sheba) and Jack (Bojay) both very good, there was some
excellent model work with the ships ablaze (used before) and even some of the dog fighting
looked better or at least more varied. Baltar was his maniacal self ramping up his delusions
of Empire and the Colonial Jumpsuits were great. 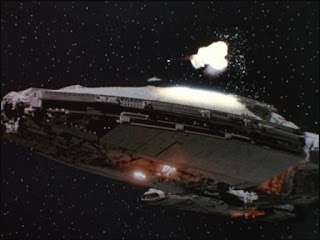 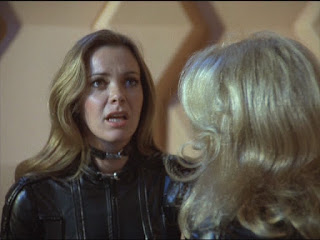 It was a little Star Wars having the Emperor visiting the world under attack from a "rebel"
force so to speak but again I'm not going to hold that against them but the Cylons really
do need to address orbital defence and point defence systems, sometimes they make it
too easy for the Colonials.
A little trivia, Anne Lockheart now provides the voice for the fire houses controller in
the very entertaining Chicago Fire.

So did Kane and the Pegasus survive?
If the show had continued then yes they would have been brought back but either way
the events over Gomorray fitted the legend that was Kane.
IMDB
Wiki