United
The second episode of the three parter continues with the Andorians and Tellarites clashing onboard the Enterprise as the fiendish plot to turn worlds against each other is all too successful. Tripp and Malcolm still stuck on the alien ship continue to search for a means to escape and Archer is forced to engage in a honour duel to prevent the death of an ambassador.
A solid and entertaining episode, once again Shran is a delight and Archer pulls the proverbial rabbit out of the hat to defuse the situation and earn more respect from the Andorians and Tellarites. 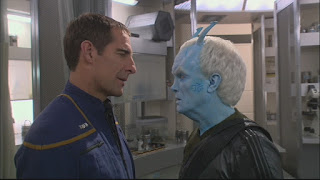 The Aenar
The discovery of the pilot leads the Enterprise back to Andorian and a meeting with a secretive offshoot who are highly telepathic. Shran bonds with the young Aenar "Jhamel" who agrees to operate the device which they hope will allow them to access the remote systems of the alien starship. Once again we get some excellent work down fleshing out one of the first Trek alien races, the Aenar being a good addition without seeming to be too silly or desperate.
The consequences of Archer's actions strengthen the bonds between him and Shran and by extension cements maybe the first real agreements between the Andorians and Tellarites two of the founding members of the Federation. 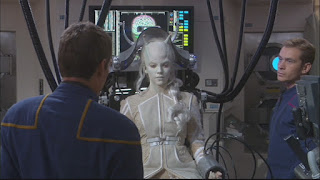 Affliction
Phlox is kidnapped whilst on Earth and it seems that someone in Starfleet may have helped to facilitate the abduction. We get more twists and turns as it turns out the Klingons are behind the kidnapping and a shadowy organisation within Starfleet who quote Section 31 of the charter have an operative on board the Enterprise and is ordered to prevent the ship from rescuing Phlox.
Affliction is the first half of a two part Klingon centric story which ultimately attempts to provide a reasonable explanation of why some Klingons have ridges and others as in TOS were smooth. In that regard I think it succeeded and the use of the human augment DNA just ties everything together. 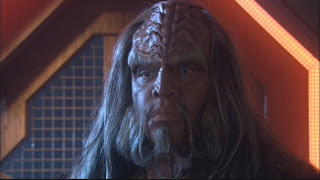 Divergence
The Klingon story concludes with Phlox and his new friend searching for an antidote to the augmented DNA while avoiding being killed by the Klingon who sponsored these experiments who now needs to show results before the fleet arrives and bombards the planet from orbit.
Enterprise agrees to aid the research and has to fight off Klingons ships in the provess but it still takes a desperate hail mary pass to bring the events to a satisfying conclusion at least to most of the parties involved.
The Klingons in Enterprise have been done well, prosthetics are spot on as you would expect and the mannerisms and attitudes refined from years of TNG and DS9, all these factors add to the real quality in these two episodes. Of course not everyone is happy with the explanation of more human looking Klingons and others not able just to ignore it as being a product of the TV market at the time. 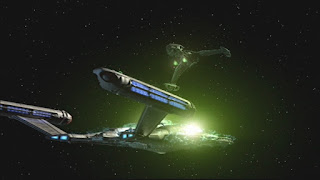