Kir'Shara
The Enterprise warns the Andorians via Shran about the impending invasion but the
High Command through V'Las will not back down and the ship gets caught in a
shooting war. Meanwhile on Vulcan T'Pau, Archer and T'Pol find the writings of
Surak and venture forth with the goal to face down the Vulcan leadership with proof
that the Vulcans have moved off the path of logic and peace.
This was an excellent episode, I really did like the Vulcan story despite some issues
with it's timeline but T'Pau was a good call back to the original series and the clash
of Starships looked great. 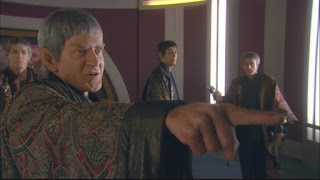 Daedalus
Emory Erickson the creator of the human transporter technology visits the ship with
the aim to test a long range system which may make ships obsolete, you know like the
Stargate. However he has another reason for being there, he intends to co-opt the ship
to attempt to find his son lost in a transporter accident no matter what the consequences
for the Enterprise and her crew.
I wasn't fond of this episode even with echoes of the TOS The Ultimate Computer.
I thought Archer especially acted just plain wrong, he should haver slammed the door
on this experiment once he learnt of it and doubly so with the death of a crewman. 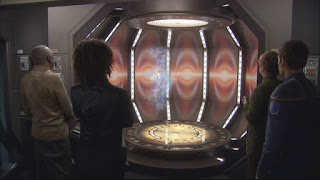 Observer Effect
Two alien beings possess bodies of the crew and observe them as they struggle with an
infection which threatens the lives of Tripp and Hoshi. The aliens view this as some sort
of test and how each visitor to this infected world reveals truths about them and maybe
just maybe a species may prove itself worthy of being contacted.
I really enjoyed this episode because of the call back to the original series and The Errand
of Mercy, I honestly think Enterprise was at it's best mining the lore of TOS and revealing
new things about existing aliens. 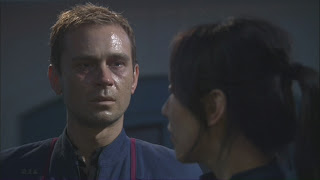 Babel One
A high level meeting between the Andorians and Tellarites is being held on Babel One and
the Enterprise is bringing the Tellarite Ambassador but they find Shran in the wreckage of his
warship and he claims it was attacked by Tellarites.
This is the background to a trilogy of episodes dealing with an external threat to the stability
of this part of the galaxy by provoking a war between species, we see once again the humans
being the convergence point and again building on the groundwork laid by TOS.
Excellent episode and a great start to this three part story. 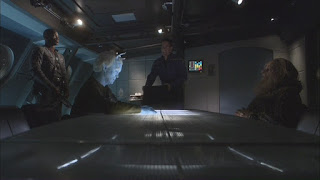