Terra Prime
Paxton (Peter Weller) now in control of an asteroid/comet energy based tractor/pusher
device located on Mars threatens Starfleet command and holds off the Enterprise with
both Trip and T'Pol as hostages. A daring rescue mission is under taken and secrets
revealed on both ships, the final scenes are heart breaking and would have made
a very satisfactory series conclusion. I don't know if it's reassuring or not that the human
race continues to rehash the same old issues, race, creed, colour, gender, orientation
etc etc. 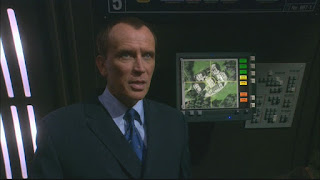 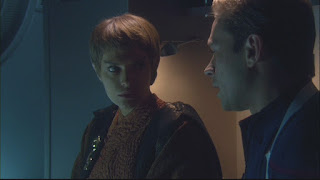 These Are the Voyages...
Ok lets get this out into the open, when this episode premiered on television I hated
it with a passion, it was a knife in the back to every single person who had supported
Enterprise by watching the show and a big F**K you from Rick and Brannon.

Deep Breath.
This is the first time I've rewatched this episode since that day so lets begin with a
few comments taken during the episode.
So the Enterprise is going to be moth balled after just ten years, maybe it wasn't
really built that well or more likely the new Warp 7 engines were incompatible and
with other developments a new generation of ships was logical. Of course it is only
fitting that the NX-01 Enterprise is used as a museum ship, she made her mark in
Starfleet and the birth of the Federation.
What The F**K is Riker doing here!
Hmmm, the Enterprise D rendering looks very nice and even Riker looks pretty good
in the Enterprise blue jumpsuits perhaps the best uniforms of any series and very fitting
that Jeffrey Combs gets one more Trek appearance.
Considering it's ten years later I'm surprised how little the cast has aged, T'Pol is the
only one that has definitely altered looking more open and relaxed which is more of a
state of mind considering the extended Vulcan lifespan, her boobs look smaller.
Were the Enterprise D holodecks that advanced in creating interactive forms of real
people based on profiles and anyother data the ship carried? I guess in TNG
Moriarty was a pinnacle of creativity but with the crew of the NX-01 where is the raw
data coming from, Klingon and Romulan security would have this level of snooping but
Starfleet?
Nice touch with Trip wanting the ship to be as good as possible at retirement, a nod to
Scotty repairing his Enterprise upon returning to spacedock.
What do you mean Tucker ain't coming back!
Blimey security seems to be pretty lax onboard the ship these days and that's the way
Trip ends his voyage amongst the stars, lame.
Loved the group chat prior to the speech commencement, one final wide wide smile
from Phlox and loved the hug, they've come a long way.
The final WTF moment, you f*****g bastards this isn't TNG it's Enterprise lets hear
the critical speech Archer has been prepping for which kick starts the Federation.

Damn, the three Enterprises and voice over, not so pissed now. 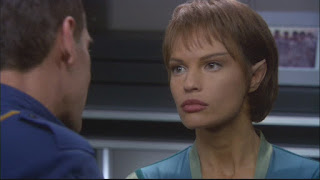 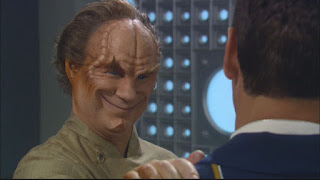 So what do I think now, well I still believe Rick and Brannon had the right to do the
finale but I also believe it should have been a thank you to the fans that kept the
show on the air and who gave even more support in the final season on UPN.
The idea of doing a TNG/Enterprise crossover via the holodeck has a lot of merit
but the series finale was not the time and place, it screamed disrespect to the cast
and crew maybe even more so than the viewers.

This is the end (for now) of my Enterprise viewing, I suspect I may still watch the odd
episode during my listening to the Previously in the Alpha Quadrant podcast but for now
it's been fun and the show proved even more entertaining the second time around.
I've only skipped one episode but there were a few I'd probably skip if I rewatch within
the next year or so but that's still an impressive percentage of watchable episodes.

May the journey never end.