With the unexpected cancellation of Farscape at the end of it's fourth year fans were left high and dry with the "deaths" of Aeryn and John right after the magical moment when they become engaged and celebrate the pregnancy. What made it worse was the "to be continued" which in itself can got your back up but the cancellation was brutal and Syfy (Scifi at the time) should have been ashamed but redemption was around the corner as in association with Hallmark and Henson a tv/dvd movie was put into production.
The result was The Peacekeeper Wars which pretty much took the proposed 5th season arc and trimmed it down to it's essentials for a 3 hour event which covered the long promised conflict between the Scarran Empire and Peacekeepers. 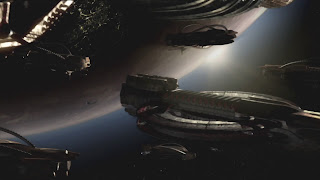 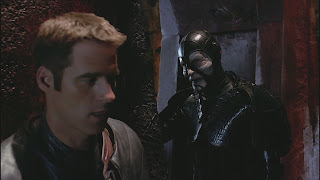 The war is not going well for the Peacekeepers who are out manned and gunned and have lost every battle against the Scarran fleets but when John and Aeryn are revived the pesky Harvey is also reborn and Scorpius knows once again that the promise of Wormhole weaponry is within his grasp and it is perhaps that is the only weapon that could tip the balance.

The crew of Moya discover the descendants of the Eidelons on the waterworld where Moya was recuperating and with fresh blood there is hope that the fabled bringers of peace can once again influence the galaxy away from the upcoming bloodbath. Alas both the Scarran Emperor and Scorpius have their own plans and the current Eidelons and their forebears from 12000 cycles ago suffer a terrible fate but hope is not lost.
Ultimately reason and common sense fail to convince the Peacekeepers and Scarrans which leaves John with only one recourse, he visits the wormhole aliens and request the knowledge to weaponise the wormhole knowledge and is given it. Armed with this information John builds the device and in the midst of an epic space battle between huge fleets John lays down the ultimatum, peace or total destruction and he rolls the dice and a wormhole capable of devouring the galaxy is born. 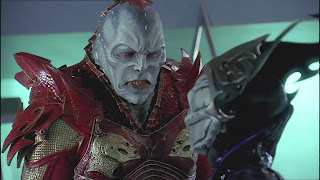 The Peacekeeper Wars is a wonderful conclusion to the series and makes up for the shock of the shows cancellation, all the expected characters are back even if some have very little screen time but you can't turn a season into three hours and make everyone happy. The HD production is solid but maybe a little too much DNR in places which really takes away from the amazing makeup and prosthetic work being done but this show is great for the sheer in your face HD can bring.
The Blu-ray was imported from Amazon in Germany and includes the English DD5.1 soundtrack, a good price but p&p a little steep and it's a shame this movie couldn't have been included in the Blu-ray series boxset or re-issued as a genuine US or UK product for bundling. 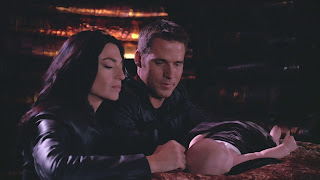