It's time for a Supernatural marathon now I have the first 5 seasons on Blu-ray thanks to the uber cheaper releases of the first couple of seasons and finally the fifth season dropping in price as well. No sixth season anytime soon as I simply won't play the game with overpriced Blu-rays, sorry guys but the format war killed the formats illusion of awesomeness. Jared Padalecki (Sam) and Jensen Ackles (Dean) star in the long running show (7th season kicks off September 23rd) with a recurring role by Jeffrey Dean Morgan playing John the missing father to the boys.
The series premiered September 13th on The WB network which later morphed into The CW and to this day the first season pulled in the shows highest ratings and despite changes in approach and timeslot/days it's retained a solid core audience and good syndication, overseas and media sales.
These brief comments may contain a few spoilers at least from within each season, I'll certain try to avoid any more significant spoilers.


"Pilot"
The death of the boys mother kicks the series off and lays the ground work for what is to come. Years later with Dean following in the hunter tradition and Sam in college they are brought together again when their father goes missing while investigating a spate of men missing on a highway outside of Jericho. Guest stars include the scrumptious Sarah Shahi a very young Jamil Walker Smith and Adrianne Palicki. An excellent series opener with lots of suspense, action, humour and top notch production value. 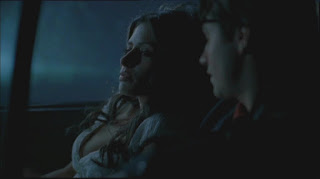 S1E2 "Wendigo"
A video recording of missing guys and a scary monster in the woods leads they boys into Colorado to take on a legend from native American folklore. Rather a generic story but well shot and a solid second episode with Gina Holden and Callum Keith Rennie providing excellent support.


S1E3 "Dead In The Water"
Ok maybe there is theme with this show but it works so lets not knock it:)
Newspaper articles lead Dean and Sam to Lake Manitoc whose waters have claimed many victims but it's never relinquished their bodies. The delectable Amy Acker guest stars as Andrea a mom whose husband mysteriously drowned a few years before and so agents Ford and Hamill investigate. A good twist to the story and kudos to the filming and editing of the bath sequence:) 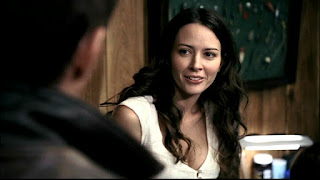 S1E4 "Phantom Traveler"
Suicide by plane or more to the point falling out of the plane thus causing the plane to decompress and crash has a friend of John Winchester calling Dean for help. Demon posession seems to be most likely cause of supposedly normal people doing crazy things and when the survivors of the crash then start dying in more place crashes it's time to climb aboard and chase down the entity responsible.
Jamie Ray Newman guest stars and you have to say the show did well in the early days with picking actors who become familiar within this genre.
Side note the reference to the haunting of a previous plane is based on fact when a crashed airliner was salvaged and some parts used in other planes and subsequent crews claimed to have seen apparitions. 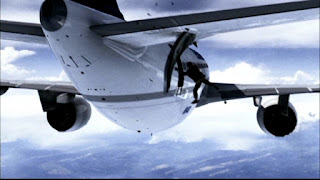 S1E5 "Bloody Mary"
A good old story of urban folklore and the weakest episode so far.
Guilt is the driving force of this myth with Sam himself being open to it's influence but I really felt my attention waundering whilst watching.


S1E6 "Skin"
The episode kicks off with a dark dark scene and great piece of music than the twist, da da daaaa and then 1 week earlier and so this ever popular story style begins with Sam getting a cry for help via email and the boys drive to the rescue although Dean ain't happy. What happens next is a tale of impossible acts committed by people who it seems were in two places at the same time and so the notion of a shape shifter of some sort comes into play.
This is certainly a dark and gritty episode, quite brutal really but great tv. 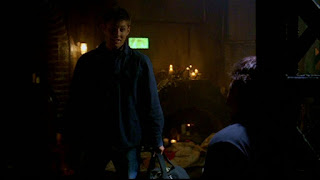